New markets in sustainability and clean energy could lead to a worldwide jobs boom, according to the UN’s labour agency.

New markets in sustainability and clean energy could lead to a worldwide jobs boom, according to the UN’s labour agency.

The International Labour Organization (ILO), which represents workers, governments and employers across 189 member states, produced the analysis into the global transition to sustainable and low-carbon economies.

The agency analysed 163 economic sectors and surveyed multiple states to obtain accurate data into how sustainability could impact working people. They found that most industries are set to benefit and only 14 would suffer more than 10,000 jobs worldwide.

Economies which are heavily dependent on petroleum and other fossil fuels could suffer a more substantial downturn with losses of over 1 million worldwide. However, the growth in renewable energy is more than ready to step in with an estimated 2.5 million new jobs created in the industry, mainly from solar, wind and biomass power.

Combined with new construction jobs in energy efficiency and electric vehicles will create a total of 18 million jobs. In addition, the uptake of circular practices which embrace an economic model based on reuse and recycling could create an extra 6 million positions.

“The findings of our report underline that jobs rely heavily on a healthy environment and the services that it provides. The green economy can enable millions more people to overcome poverty, and deliver improved livelihoods for this and future generations. This is a very positive message of opportunity in a world of complex choices,” ILO Deputy Director-General Deborah Greenfield said at the launch.

One of the other key findings of the report is that 23 countries have already succeeded in growing their economies while reducing carbon emissions at the same time. This decoupling in both production and consumption was prevalent among the world’s largest economies, such as the United States, Great Britain, and Germany. 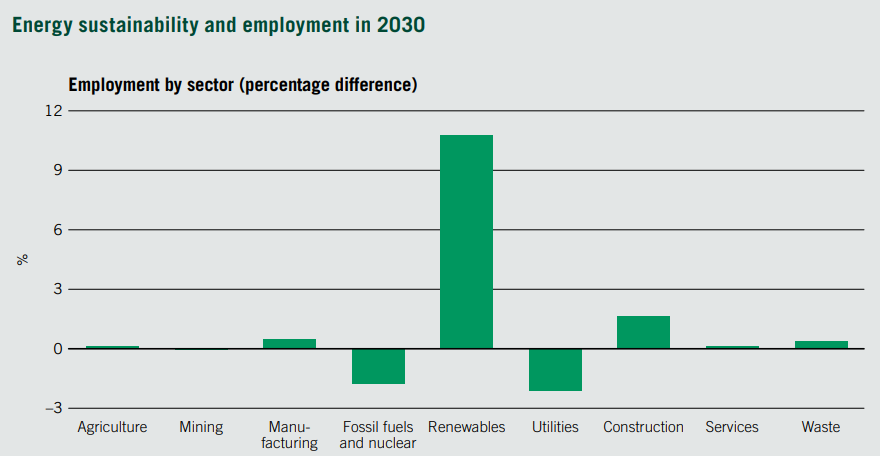