To hinder the advance of Covid-19 as it spread around the world in early 2020, governments enacted lockdowns that shuttered businesses, limited social activity and stalled the global economy. The long-term impact of the virus was yet to be fully realized, but companies forced to shut down temporarily faced an immediate and pressing question: how long will the lockdowns last?

To hinder the advance of Covid-19 as it spread around the world in early 2020, governments enacted lockdowns that shuttered businesses, limited social activity and stalled the global economy. The long-term impact of the virus was yet to be fully realized, but companies forced to shut down temporarily faced an immediate and pressing question: how long will the lockdowns last? With staff members in limbo, supply chains blocked up, and revenue dwindling to a trickle or extinguished entirely, decision makers were forced to confront radical uncertainty.

At the time, governments around the world made a series of cautious guesses about the lockdown lengths to help people prepare. In March, Canadian Prime Minister Justin Trudeau said, “I know people are interested in when things will go back to normal. The reality is, it’s going to be weeks still.” UK Prime Minister Boris Johnson said he would relax the lockdown in “three weeks” if possible. And French President Emmanuel Macron announced “severely restrict movements for the next 15 days at least”.

Many businesses took these statements as forecasts and prepared accordingly. Now, a year on and with many countries still in lockdown, we know that these initial statements were laughably naïve – hindsight is 20:20, after all.

But was there a way for us to get our hands around the range of possible futures back in March?

Riskthinking.AI, the company I founded, took a different approach to the usual forecasting methods used so widely in risk management. We conducted a global survey of 303 experts in the finance community ranging from risk managers to consultants to bankers to ascertain their perspectives on the crisis. Alongside several questions on how the situation would impact the global economy over the next six to eight months, we also asked them to estimate how long they thought the lockdowns would last in their region.

The responses we received were highly varied, but remarkably, they were able to capture what actually happened (see figure below). 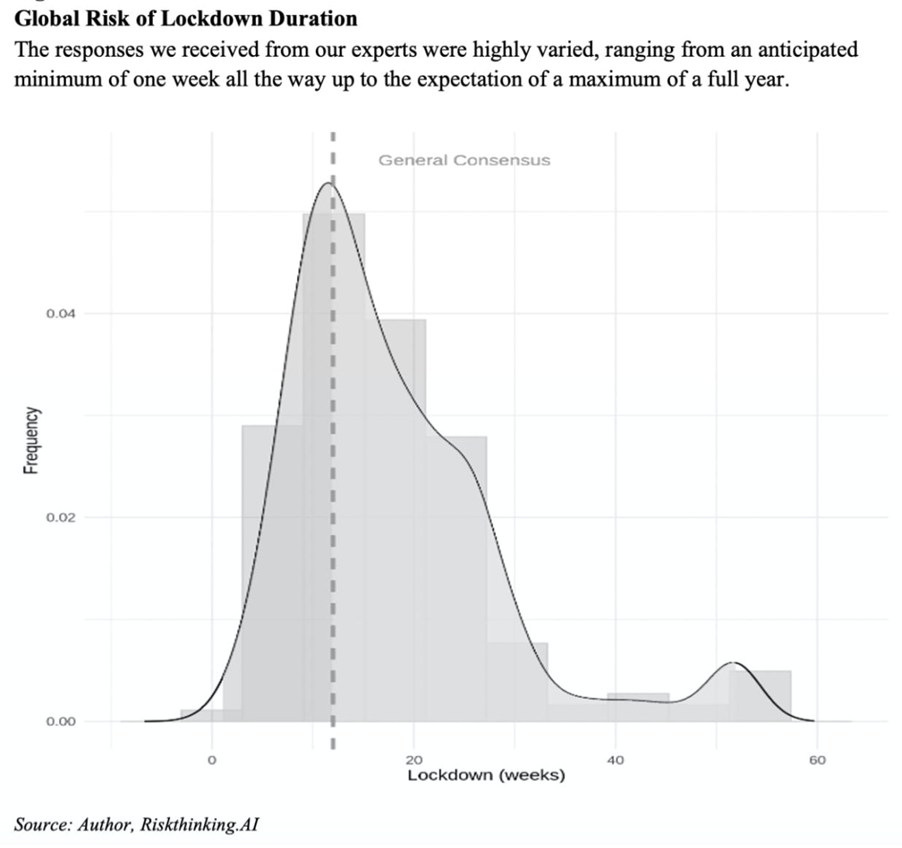 On the right-hand side of this distribution, we can observe what is known as a ‘fat tail’. That is a small but significant number of experts who judged the length of the lockdown to be at the extreme end: 52 weeks.

At Riskthinking.AI, we believe that identifying these extremes through the use of expert judgement can help decision-makers capture those low-probability, high-impact possibilities that are so damaging to their prosperity. A company that was aware of the possibility that lockdowns could last for up to a year might have been able to take out a hedge against it – some kind of backup plan or insurance.

When asking our experts for their judgment on lockdown length, we also asked for their judgment on what effect they thought Covid-19 would have on several financial benchmarks including the S&P 500 over the next six months, relative to its closing level on Thursday, March 26 (2,630). As we can see below, the prevailing view was that it could go either way, and the middle value sat around -15%. Once again, the level of uncertainty was extraordinary, ranging from a minimum prediction of -84% to a maximum prediction of +72%. 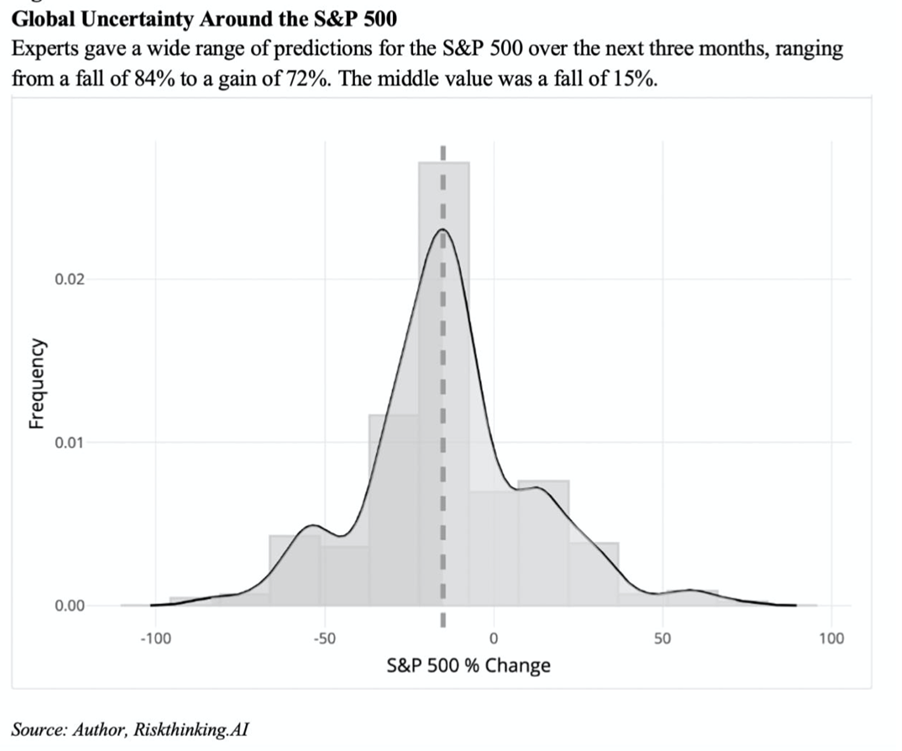 Now, if we go and look at what actually happened in the S&P 500 during the period (see below), we see that the middle value our participants gave (-15%) was way off. The S&P 500, to everyone’s surprise, shot back up to levels seen before the outbreak. That is why it is crucial, as a risk thinker, to avoid just taking the middle value as a forecast when facing a radically uncertain future. Quite often, the middle value is meaningless.

More importantly, if we took our uncertainty distribution and laid it over the S&P 500’s actual movement (as we have done with the shaded box), we find that the actual movement was fully contained within the minimum and maximum projected values of our respondents. The first ‘box’ shows the ranges for the S&P for the first 3 months and the second ‘box’ resulted from a new set of scenarios that were generated after 3 months to cover the next 6 months. Curiously, the market sentiment was that the second 3 months were more uncertain than the first 3 months. 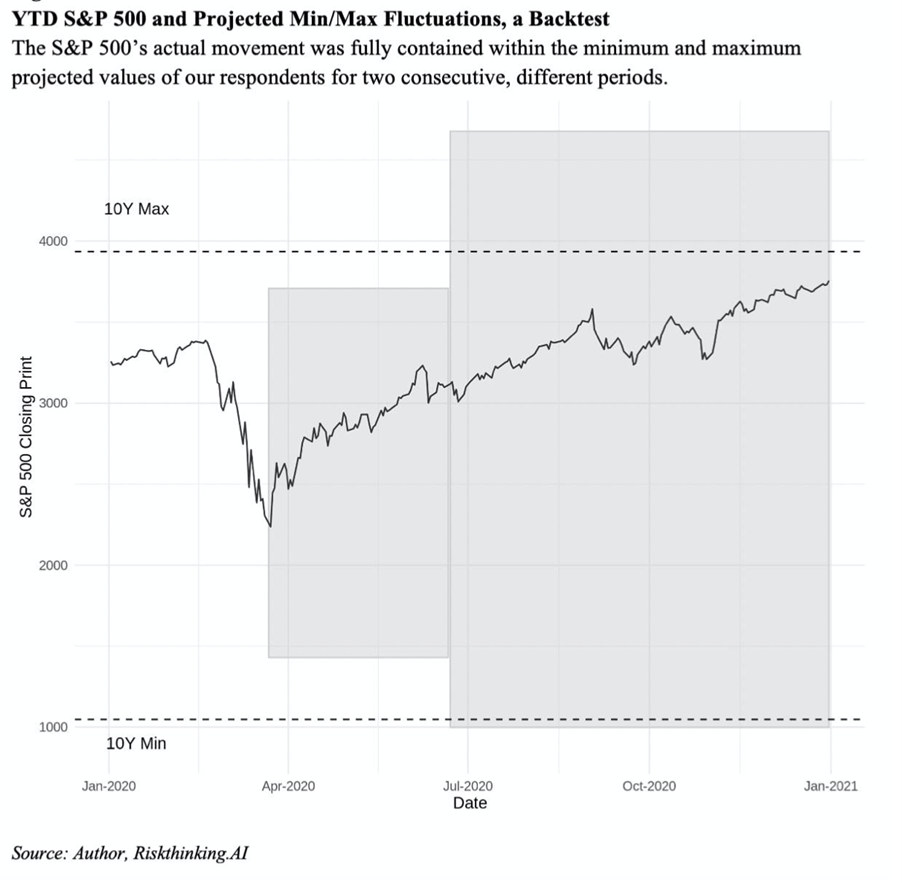 If we were to manage risk in the range that our experts predicted, we would have performed well. This range is extreme, however, compared with any kind of risk management that would have been done at the time with standard risk tools. And that is one of the most important benefits of obtaining expert judgments: they provide us with a good indication of both the extreme upsides and the extreme downsides that are possible – they have a strong ability to encompass the full range of possible futures.

Canada and France just now entering their third lockdown. Variants are being spotted at alarming rates. Yet governments are still making deterministic statements in the face of radical uncertainty. Speaking about reopening the economy, Boris Johnson, for example, recently stated: “Our whole strategy is to go forward in a way that is cautious but irreversible, and we don’t think that there’s any reason on this basis to change that now.” I wonder, if we asked our experts again, what they would think.