That is the conclusion of a report by The Climate Group and CDP, which lead the initiative and collated new data from companies involved.

Over the past year, the group has increased its membership by 40 percent, meaning that there are now 122 global companies committed to making the transition to run entirely on renewables. The report details how the combined energy consumption of these companies would be enough to power a country the size of Malaysia.

Helen Clarkson, Chief Executive Officer, The Climate Group, said: “Rapidly growing demand from world-leading RE100 companies – and increasingly their suppliers and peers – means governments can confidently look to ratchet up targets in 2020 for slashing greenhouse emissions, to deliver on the Paris Agreement”.

Significant progress has been made among a full range of multinational companies in sectors ranging from pharmaceuticals to banking.

25 members had already reached the goal of 100 percent renewable electricity by the end of 2016, including Autodesk, Marks and Spencer and Sky. In addition, Bank of America, Astra Zeneca and Coca Cola increased their share by 300 percent.

The average amount of renewable electricity used by RE100 members was 32 percent, a drop of 18% on the previous year’s reporting. However, this could be attributed to new members joining which are at an earlier stage of making progress.

However, many respondents said policy barriers were a stumbling block towards buying renewable electricity. Some countries don’t have a developed market to guarantee electricity comes from a renewable source, while others need to simplify access.

In other news, 88 percent of those canvassed for the report cited the economic case for increasing their use of renewables. The dramatic fall in the price of solar and wind in recent years has meant a more attractive investment climate.

Paul Simpson, Chief Executive Officer, CDP, commented: “With nearly 90 percent of companies driven by the economic case for renewables, this demonstrates a fast approaching tipping point in the transition to a zero-carbon economy.  These companies prove that energy is becoming a board level issue across the globe and sustainability is essential for future business security. Now, it’s time to tip the balance and make 100 percent renewable the new normal”. 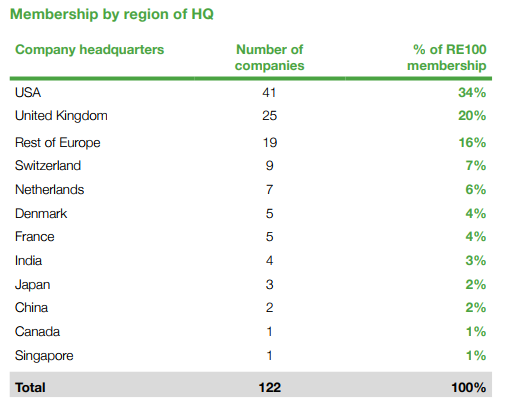 Membership of the group extends around the world