Weather events in 2017 caused record damage in the United States

The United States experienced 16 weather and climate disasters in 2017, which caused a record amount of damage, according to a report by the government’s scientific agency.

The United States experienced 16 weather and climate disasters in 2017, which caused a record amount of damage, according to a report by the government’s scientific agency.

On Monday, the National Oceanic and Atmospheric Administration (NOAA) released its assessment on 2017’s weather and climate events.

It revealed that 2017 was a year of unprecedented weather events, which caused over $300bn of damage. Major events across the year included three Hurricanes (Irma, Harvey, and Maria), multiple wildfires in California and a hailstorm in Colorado.

The previous record for weather-related costs was in 2005 when subsequent Hurricanes, such as Katrina, hit the US and caused $214bn of damages.

In addition, the report makes clear that temperatures in the US were the third warmest in 123 years of the agency’s record keeping. The five warmest years have all occurred in the past 11 years, with 2012 being the warmest.

The agency also highlighted individual states that saw their warmest weather on record, stating: “Five states – Arizona, Georgia, New Mexico, North Carolina and South Carolina – had their warmest year on record. Thirty-two additional states, including Alaska, had annual temperatures that ranked among the 10 warmest on record”. 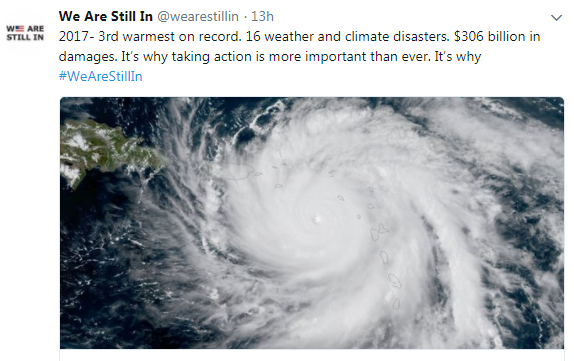 The WeAreStillIn Coalition responded with a call to action

"In 2017, we have seen the rare combination of high disaster frequency, disaster cost and diversity of weather and climate extreme events,"

He concluded: "Climate change is playing an increasing role, amplifying the frequency and intensity of certain types of extreme weather that lead to billion-dollar disasters".