Michael Gove, the Secretary of State for Environment has revealed that the UK government is considering establishing a new regulator to make sure that the country’s environmental standards are still in place after the UK leaves the European Union.

Michael Gove, the Secretary of State for Environment has revealed that the UK government is considering establishing a new regulator to make sure that the country’s environmental standards are still in place after the UK leaves the European Union.

The announcement took place during the House of Lords Energy and Environment Committee meeting on Thursday.

Mr. Gove said that Department for Environment Food & Rural Affairs (DEFRA) is acknowledging the concerns that have been expressed by GreenerUK, a coalition of 13 environmental NGOs, that environmental protection regulations are safeguarded after 2019.

Mr. Gove said: "It's been put to me by a variety of organisations that we need to reflect on our own institutional architecture”.

He expressed his doubts on whether committees such as the Energy and Environment will be enough to ensure a judicial review of environmental regulations, and he reassured that he will put the matter up for consultation.

“These arguments are strong and powerful and there is a responsibility on my department and others to come forward with some propositions that will answer those concerns”.

Greener UK, which includes the RSPB, Greenpeace and the National Trust, welcomed the news but urged the government to clarify its plans.

Shaun Spiers, Chair of Greener UK and Executive Director of Green Alliance, commented: "The government shouldn't waste any time starting the conversation about what this body or bodies should look like as it will need to come into effect the day we leave the EU”.

"Any new organisation will need adequate resources for effective governance.  It will have to be fully independent of government, with statutory power, and accountable to the relevant parliament or assembly”.

Green groups have urged for a number of amendments to the Withdrawal Bill to safeguard adequate governance mechanism for environmental protection.

The recommendations have been rejected by some MPs that argue that the country should hold the prerogative to amend some environmental rules that undermine UK competitiveness.

Last week, the government confirmed that it has undertaken a series of impact assessments about how green industries such as renewable energy and environmental services companies will be affected by Brexit, but the results haven’t been published yet.

In its latest report air, chemicals and waste received a high-risk rating, with the rest of the areas receiving a medium-risk rating. 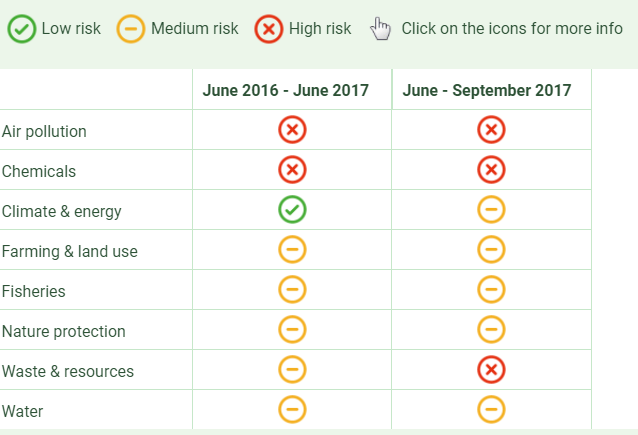 You can learn more on the risk tracker here.