Turn down the AC: how air conditioners are set to drive global energy demand

Rising demand for cooling technologies in hot countries will place enormous pressure on electricity systems and put climate targets at risk, according to a new report.

Fresh analysis from the International Energy Agency (IEA) highlights that only 8 percent of the population in some of the world’s hottest countries have access to an air conditioner. As living standards improve, energy demand from this group of 2.8 billion people is expected to triple by 2050.

This enormous rise, coupled with the widespread use of inefficient technologies, will require extra electricity equivalent to the combined capacity in the United States, EU and Japan.

Air conditioners and electric fans currently make up 10 percent of all electricity consumption. Without measures to address the oncoming growth, this could increase to 37 percent, making the ability to reduce carbon emissions much harder.

Strong policy action is needed to fix this problem early with tighter energy standards to existing devices that would prevent the need to build a large number of new power plants. Investing in more efficient air conditioners could help halve the growth in demand, and reduce costs by up to $3 trillion, according to the IEA.

The report seeks to address a critical “blind spot” in the debate around the transition to low-carbon forms of energy. Large economies, such as China, India and Indonesia are expected to account for half of all the increase.

Dr Fatih Birol, the Executive Director of the IEA commented: “With rising incomes, air conditioner ownership will skyrocket, especially in the emerging world. While this will bring extra comfort and improve daily lives, it is essential that efficiency performance for ACs be prioritized. Standards for the bulk of these new ACs are much lower than where they should be.” 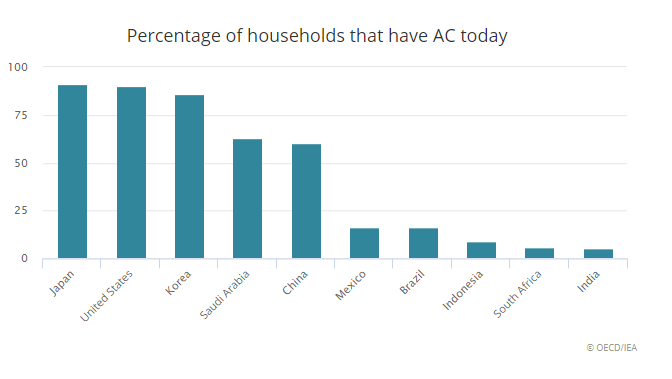