Henrik Poulsen, who led the transformation of Orsted, believes that companies have a dual responsibility – to shareholders, for whom they must make money, and to society, to which they must make a positive contribution. The company is an example of how these objectives can be successfully combined, and is a model for both sustainability and for shareholder value creation. In transitioning from ‘dirty’ to ‘clean’, it improved its return on invested capital, expanded its margins, and dramatically improved its valuation. Orsted’s story is one of value creation through transformation, and provides a roadmap for how others might follow. 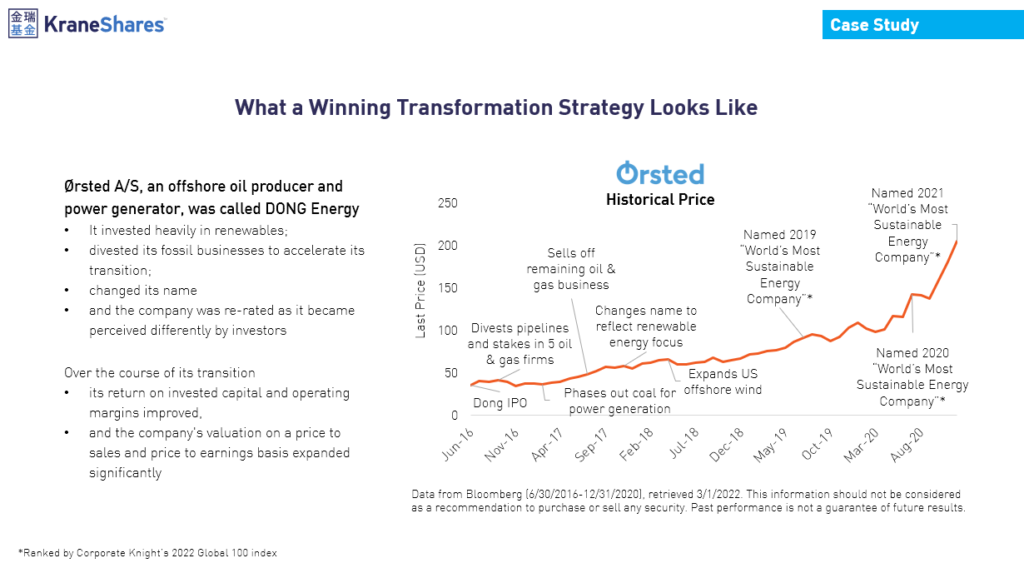 Orsted is a renewable power generator and a world leader in offshore wind. It was not always so. In fact, it was barely more than a decade ago that Orsted was heavily leveraged to fossil fuels. In 2008, the then CEO of the company, which at the time was called DONG Energy (Dansk Olie og Naturgas A/S), began a discussion about the future of the company.

85% of DONG’s business at the time was fossil fuel-related, and in fact, it considered itself a world leader in efficient coal-fired power generation. Two years earlier it had begun the planning process for a new state-of-the-art coal-fired power plant in Germany. But public opinion had started to turn against the company’s plans. Facing mounting objection, management realized that building thermal power plants was not a sustainable business model, either from an environmental or ultimately from a shareholder value perspective.

Perceiving the need to change, management could see that moving early would be advantageous, and would reduce the risk of being left with a dying business model and stranded assets. Importantly, the executive team at DONG took stock of the company’s strengths, adjacencies, technologies, and differentiated skills, and determined that the area where they had the greatest potential competitive edge was in offshore wind. Leveraging existing experience in onshore wind and in offshore oil and gas, management mapped out a new vision for the company, one that set a goal of completely flipping its 85/15 fossil to the renewable generation mix.

The initial wind investments were not without teething problems, as the company adapted land-based equipment to the more hostile offshore environment. In short term, the company incurred higher costs, but as learnings grew, so did competitive advantage, and the DONG management team moved decisively. It is now cheaper to build offshore wind farms than it is to develop new coal or gas-fired power plants. By 2019, Orsted was the world’s largest offshore wind power company.

The Orsted example provides a playbook for companies that aspire to the energy transition. The management team defined a vision, set tangible targets, and executed effectively. In doing so, they transformed the company’s business model, its contribution to society, and its valuation.

In the KraneShares Global Carbon Transformation ETF (Ticker: KGHG), our playbook is to identify and invest in those companies that are the Orsteds of the future. We seek to identify committed corporate change agents who through their transformation can materially reduce their, and the planet’s, carbon emissions. Like DONG at the outset, their carbon footprint today may not be pristine, but their commitment to reduce it can create substantial social and financial value. According to research by the Climate Accountability Institute, 63% of cumulative worldwide emissions of industrial CO2 and methane between 1751 and 2010 can be attributed to 90 “carbon major” companies, of which more than a third are investor-owned.

While evaluating companies on ESG scoring is by nature backward-looking, KGHG invests ‘in the problem’ as this is where substantial impact can be achieved. Unless the world’s major companies in its highest emitting industries reform their behaviors, tackling climate change ‘from the outside’ will be tremendously challenging. Adopting only an ESG-centric approach of avoiding those companies that are substantially contributing to the problem is inherently limited. We expect that among the incumbents in the world’s high emitting industries, carbon transformation leaders will emerge, and through their actions will demonstrate that significant social and financial value can be achieved.

Within these high emitting industries, KGHG seeks companies that have existing adjacencies with the potential to provide a competitive advantage in decarbonization growth areas; and have the leadership and strategic commitment; the execution capability; and the shareholder support they require to succeed in this transition. To find them, we look within the industries where both the need and opportunity for change exists and narrow our focus to those companies that understand both the opportunity of transformation and the risks of inaction. We follow strategic intent, capital flows, and portfolio repositioning.

Orsted recognized that its legacy business did not have a long-term future, and that a delay in acting could harm its shareholder value. Its management team had the vision, the will, and the skills to execute. As climate impact becomes increasingly obvious, we believe that the pressure for change is going to increase and the rate of change will accelerate. 80% of the energy consumed globally today is delivered from fossil fuels, and we are coming to understand very clearly that this is inherently unsustainable. With an ever-larger number of investors recognizing the need to overhaul the way we consume energy, we believe that the emerging decarbonization leaders will start to see their transformational value reflected before the process is complete.

Investing in the energy transition provides a unique opportunity for an alignment of social and financial goals. Orsted provides a success playbook for investors to follow, and as more success stories appear, we believe that capital flows will accelerate, increasing the pace of change. Our planet depends upon it.

We encourage you to join us.

The KraneShares Global Carbon Transformation ETF (Ticker: KGHG) seeks to invest in companies that are emerging as decarbonization leaders and believes that a valuation arbitrage is available for capture as incumbent industry players increasingly migrate capital investment plans towards greener growth areas within their industries. KGHG portfolio manager Roger Mortimer notes that “large incumbent energy and industrial players have many of the qualities required to succeed in the energy transition, including large existing operations and customer bases; the relevant project management skills; and adjacencies to emerging areas. A targeted strategy of investing in these companies, where management is committed to the energy transition, offers, in our opinion, the potential not only for significant environmental impact but also for superior growth and revaluation among the leading participants.”