The 5 most sustainable sports venues in the world

Surprisingly sports venues are pioneers in the promotion of sustainability. Many sports venues have jumped on the sustainability bandwagon to construct or renovate their structure in a race to minimise their carbon footprint, preserve their green legacy, and take the lead in innovation.

Surprisingly sports venues are pioneers in the promotion of sustainability. Many sports venues have jumped on the sustainability bandwagon to construct or renovate their structure in a race to minimise their carbon footprint, preserve their green legacy, and take the lead in innovation.

The competition is wild.  These are some of the five top stadiums which have incorporated some of the most impressive sustainability elements into their operations, raising the bar in what is expected from sustainability in sport. 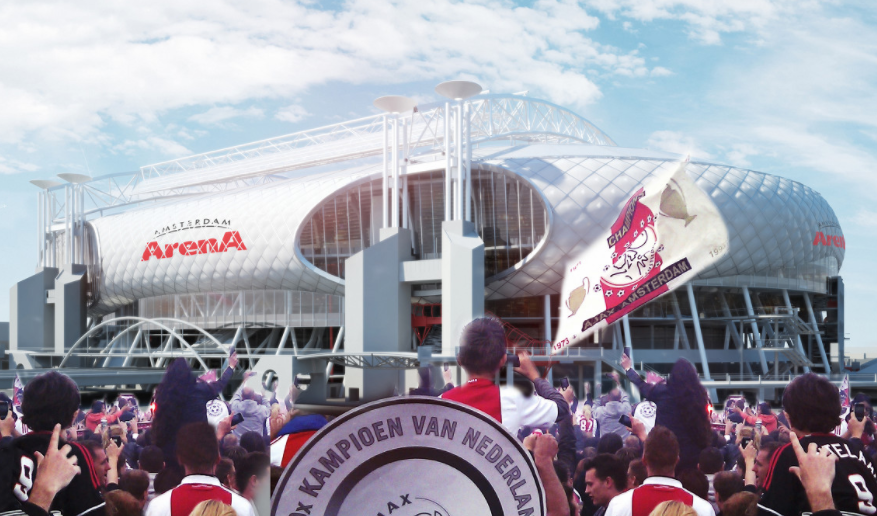 The Amsterdam ArenA, the home of the football club Ajax, is powered by more than 4,200 solar panels and one wind turbine. The main building comprises an impressive energy-generating escalator and the stadium has also installed an energy storage system powered by second-life batteries from used electric vehicles.

The xStorage Buildings system from used Nissan LEAF batteries not only provides backup power for the stadium but also distributes energy to the surrounding neighborhood when needed, to alleviate pressure on the grid.

Rainwater from the stadium roof is collected and re-used to water the grass field, significantly reducing consumption of valuable freshwater. Residual heat is used to keep frost off the playing field, a move that requires no additional energy to be wasted.

Fans are encouraged to reduce their travel emissions by using active mobility, electric vehicles or trains. The car park offers free charging points and every visitor is entitled to discounts on train tickets. 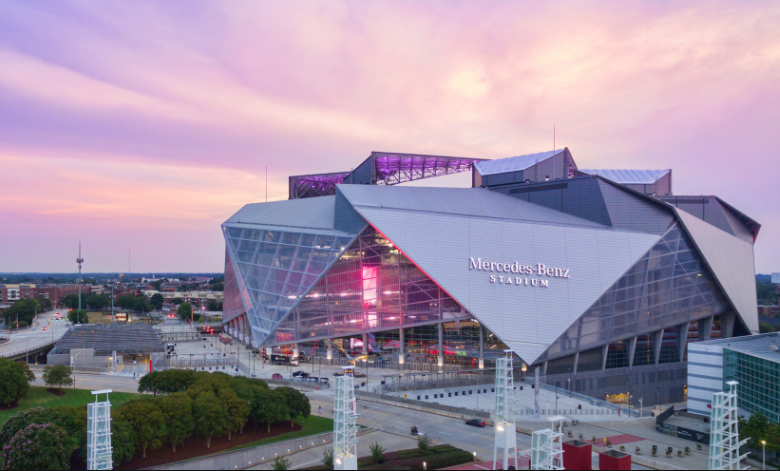 The Mercedes- Benz is the official home of Atlanta Falcons for the US National Football League (NFL) & United FC and Atlanta United FC of Major League Soccer (MLS). Last November, it became the first professional sports stadium to receive a platinum Leadership in Energy & Environmental Design (LEED) certificate, a global standard for measuring the sustainability of buildings.

Energy consumption is 29 percent less than what the average stadium consumes, due to energy efficiency and renewable energy projects. The stadium is equipped exclusively with LED lighting and LED video boards, and is less reliant on the grid due to 4,000 rooftop solar PV panels.

The stadium has a stormwater management system, with the capacity to store over 2 million gallons onsite, preventing flooding in the surrounding areas. In addition, due to water-efficient fixtures, the stadium uses 47 percent less water than the baseline standard for stadiums.

When the location was decided, the use of active mobility was at the core of the decision making. Fans can easily walk to the event through new pedestrian-friendly walking paths that allow connectivity between communities. A bicycle valet programme operates on event days, and the available electric vehicle charging stations can charge up to 48 cars simultaneously. 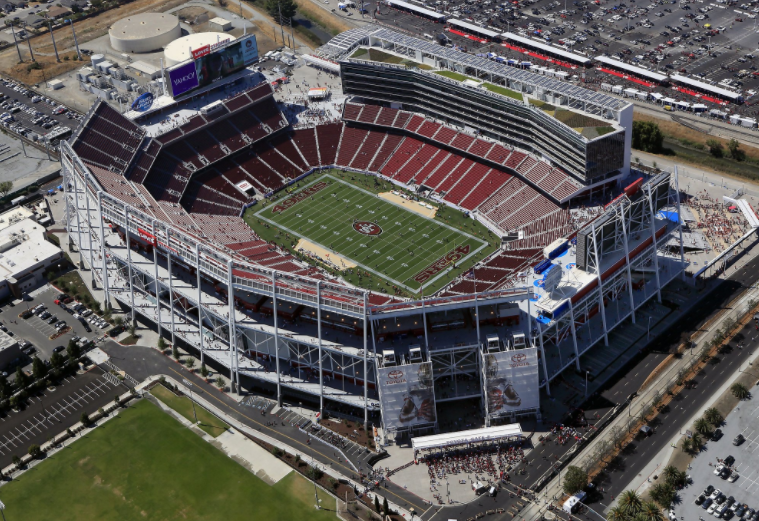 The stadium has incorporated innovative sustainability elements found in Silicon Valley, such as the 1,000-plus state-of-the-art solar elements found throughout the building including three solar array-covered pedestrian energy bridges, and one solar-panelled roof deck- the NRG Solar Terrace. It also features a 27,000 square foot “Green Roof” on the top of the stadium’s suite tower.

Due to a sustainable purchasing programme for cleaning materials and products, disposable janitorial paper products, and trash bags, almost 86 percent of such purchases won plaudits for meeting the strict sustainability criteria. The stadium is also committed to local food sourcing, with approximately 78 percent of suppliers of stadium food located within 150 miles of the stadium, and 85 percent located within California.

Last year, the San Francisco 49ers team was recognised by the White House Office of Science and Technology Policy (OSTP) for its commitment to fighting climate change. 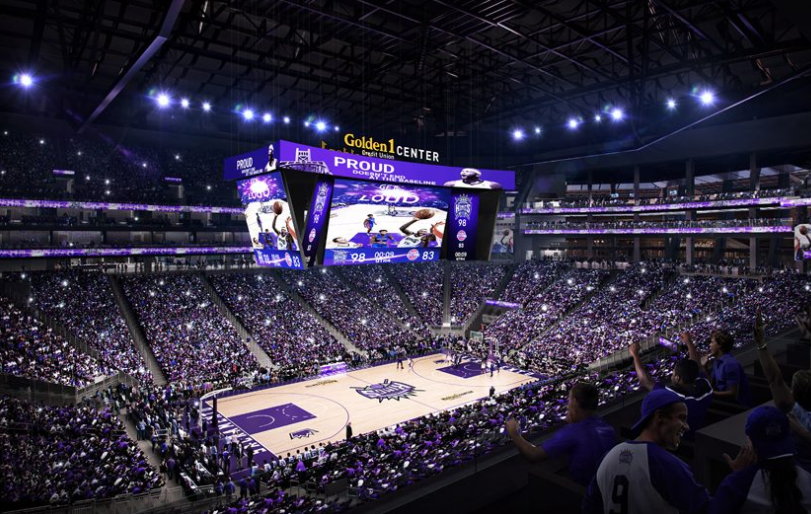 The home of Sacramento Kings was recently awarded the world’s greenest and most technologically advanced sports and entertainment facility for 2017. According to Green Project Management (GMP), the Golden 1 Center is in the top 3 percent of high-performance buildings in the world. On top of this, Sacramento Kings use their global sports platform to engage fans and proactively promote the message of climate action across their business partners and the community.

Through an urban smart grid, the venue meets 100 percent of its power needs through solar energy. Water conservation practices are particularly important to California, due to the water shortages the region has been facing in recent years. The stadium has, therefore, managed to use 45 percent less water than what the strict California code requires, setting a strong example to the local community.

The circular economy is also part of the team’s core values. After the construction of the stadium was completed in late 2016, 95 percent of construction waste was diverted from landfill and 99 percent of demolition materials were recycled.

During every season, the team also hosts a “Spotlights on Sustainability Night”, where it gives the stage to local environmental organisations to engage the audience on sustainability issues. 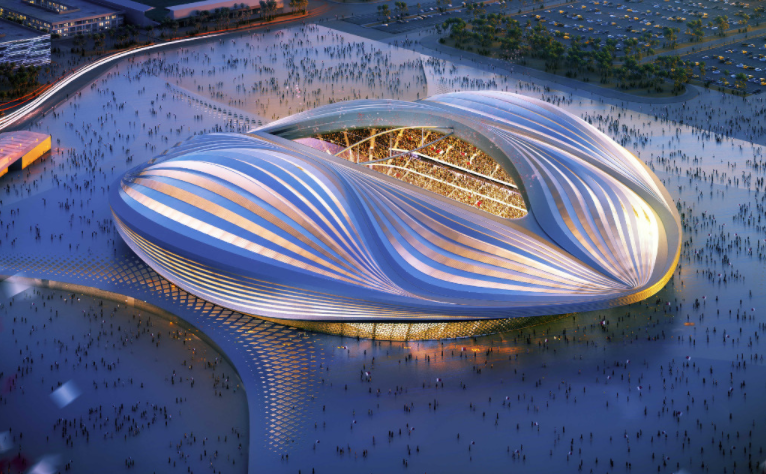 Qatar’s organisers for the 2022 football World Cup have pledged that all 12 venues (9 new and 3 renovated) will be zero-carbon emitting, as an obligatory requirement from FIFA to deliver a zero-carbon tournament.  Special climate controls within the venues will also manage the excess 40C temperatures during the event.

As a showcase in 2010, Arup Associates built the first carbon-neutral stadium, a 500-seat mini stadium, to demonstrate to FIFA that Qatar’s bid is achievable. The engineering firm managed to celebrate the potential of solar power to achieve a 100 percent zero emitting stadium despite the difficult and usually carbon intensive cooling challenge.

The technology used is simple: solar power turns the sun into energy and this energy is turned into cool air. The air is then circulated around the stadium to keep the players and the spectators comfortable. When tested, the temperatures outside hit 44°C. But inside the stadium, the temperature was a cooling 23°C even with the roof open. What is left to see is how the new actual venues will manage to scale up the technology, leading the way for the stadiums of the future.