Global crop yields are lower than they would be if the world were not warming as a result of climate change, according to research from a team at Stanford University. The researchers predict that each degree of global temperature rise will result in a 5 per cent loss of global crop yields. 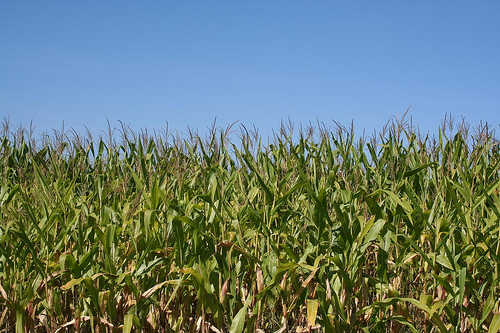 Climate change has caused a worldwide reduction in food production, according to research published in the journal Nature.

A research team at Stanford University, California, has calculated that that global corn production is 3.8 per cent lower than it would be without climate change. This is equivalent to the amount of corn Mexico currently contributes to the global market. Their report also shows that global wheat production is 2.5 per cent lower because of climate change.

These results come as a major shock for agriculture. Scientists had previously believed that crop yields would increase, at least at lower latitudes, as a result of the fertilising effect of increased CO2 levels. Lead author, David Lobell, is keen to stress that the findings must add impetus for politicians worldwide to take the effects of climate change on food production seriously. He says: "Adaptation isn't something for down the line, it's something we need right now."

The study also dispels another widely-held misconception: the researchers found that climate warming is likely to have significant detrimental effects on crop production in the developed world. It had previously been thought that warming would hit food production in developing countries harder than in the developed world, because many richer nations are in colder climates that might benefit from warming, and are probably more adaptable to changing conditions. However, Lobell argues that the relatively high production per unit area in the developed world means that developed countries are actually more susceptible to the yield reductions due to climate change. By contrast, developing nations generally have much lower production rates and are much more affected by other factors, such as the availability of fertiliser.

The report concludes that every degree of global temperature rise results in a 5 per cent loss of crop yields. Even the most optimistic UN CO2 reduction targets will still result in a global average of two degrees of warming. Consequently, global crop yields are likely to be as much as 10 per cent lower because of climate change. With the global population set to hit 7 billion later this year, this is a major cause for concern.

Can crops be climate-proofed?