Since 2010, the professional ice hockey league has run its ‘NHL Green’ campaign, which usually takes place over one week. This year, the organisation has decided to up the ante and promote its many sustainable projects over the whole of March.

As part of the month, it is encouraging fans and clubs to promote ways to be more environmentally friendly.

The NHL, and its 31 clubs, are members of the Green Sports Alliance, a non-profit organisation based in the US city of Portland. It was worked closely with the NGO to transform the way clubs operate so they are aware of environmental and climate change considerations.

From energy needs to food waste, the NHL is dedicated to moving towards sustainable development. For example, over the past eight years, it has managed to offset 126,000 metric tonnes of carbon dioxide equivalent through forestry, landfill and composting projects.

100 percent of the NHL’s energy use in the past season has been matched through the purchase of renewable energy certificates. This amounted to 235,500 megawatt hours of clean electricity, making it one of the largest users of green power in North America. 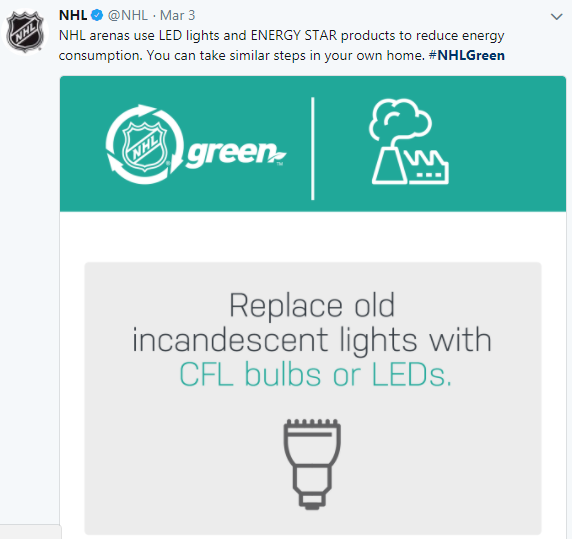 The NHL is engaging fans using the #NHLGreen hashtag throughout March

Green Sports Alliance Executive Director Justin J. Zeulner, recently told reporters that: "Imagine if all sports participated in the support and the advancement of renewable power in North America? The NHL has already proven that's possible".

"What can be inspired by being one of the largest users of green power in the US is astonishing. So we're looking to see if all sport can join the NHL and their leadership in this space to advance that here in the United States”, he added.

The National Football League has similarly taken on the challenge with a host of new sustainable projects underway and bearing fruit. This year’s Super Bowl, for example, was the most sustainable event in the tournament’s history.