On 4 October, The International Energy Agency (IEA) released its annual report on the developments of renewables worldwide, revealing that although it had underestimated the speed at which solar would expand in the past, it has become the fastest growing source of new energy in 2016.

On 4 October, The International Energy Agency (IEA) released its annual report on the developments of renewables worldwide, revealing that although it had underestimated the speed at which solar would expand in the past, it has become the fastest growing source of new energy in 2016.

New solar capacity grew by 50 percent, with Chinese solar additions accounting for almost half of the total global expansion.

In addition, in 2016 the deployment in solar PV and wind was accompanied by record-low auction prices as low as 3 c/KWh, which are increasingly comparable or lower to the generation cost of newly built gas and coal power plants. 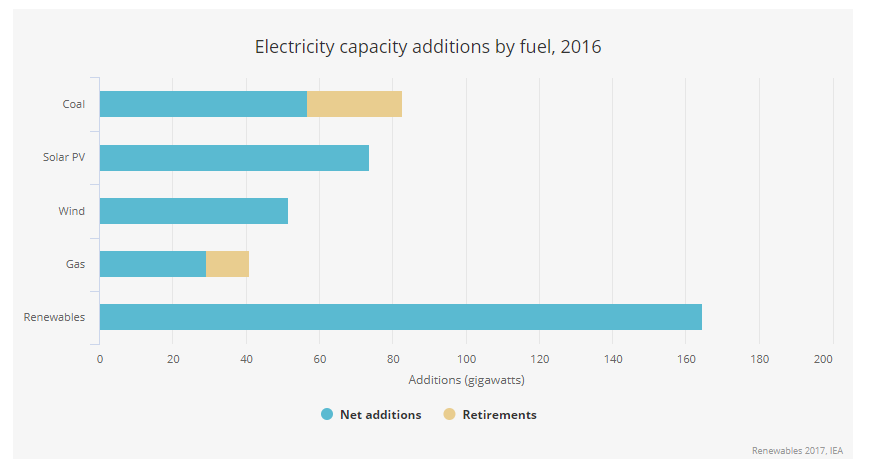 Renewable energy sources accounted for more than 65 percent of all new energy generation that was added, namely 165GW of clean energy additions.

The growth of renewable energy power is estimated to be twice the aggregated growth of gas and coal over the next five years.

Dr. Fatih Birol, the Executive Director of the IEA, said: “What we are witnessing is the birth of a new era in solar photovoltaics. We expect that solar PV capacity growth will be higher than any other renewable technology up to 2022.”

He added: “We see renewables growing by about 1,000 GW by 2022, which equals about half of the current global capacity in coal power, which took 80 years to build”.

This year’s forecast is 12 percent higher than last year, mainly due to solar PV upwards revisions in China and India.

China, India and the United States are expected to account for two thirds of global renewable additions by 2022.

Despite the US being the second largest growth for renewables, proposed tax reforms, international trade and energy policy could alter the economics of renewables and may alter the forecasted growth.

India is expected to more than double its current renewable electricity capacity by 2022, and the main drive is to address the financial health of its utilities and tackle grid-integration issues.

By 2022, global renewables electricity generation is expected to grow by over one-third to over 8 000TWh , equal to the total power consumption of China, India and Germany combined.