Public demand and spending can help with economy-wide decarbonization by creating market preferences for low-carbon products. The question is what will drive demand to favor such buying decisions.

People – and businesses – are creatures of habit. That's why driving behavioral change is notoriously difficult. However, it is a nut that will need to be cracked in order to meet the goal of achieving carbon neutrality by 2050.

Advances in technology, supportive policies and public pressure have coalesced to move us closer to this target. But we are certainly not out of the woods yet.

Progress depends on generating market demand for 'low carbon' or 'no carbon' products over ones with a bigger carbon footprint. Here are four key drivers for stimulating that demand.

Data shows that in many sectors, decarbonization will only have a small impact on end consumer prices. Using 'green' steel would likely add no more than $180 to the price of a car. And a liter of soft drink could cost less than $0.01 more if zero-emissions plastics were used.

Given those small differences, market development could be boosted by focusing on environmentally conscious audiences who are willing to pay a little more for an ethical choice. 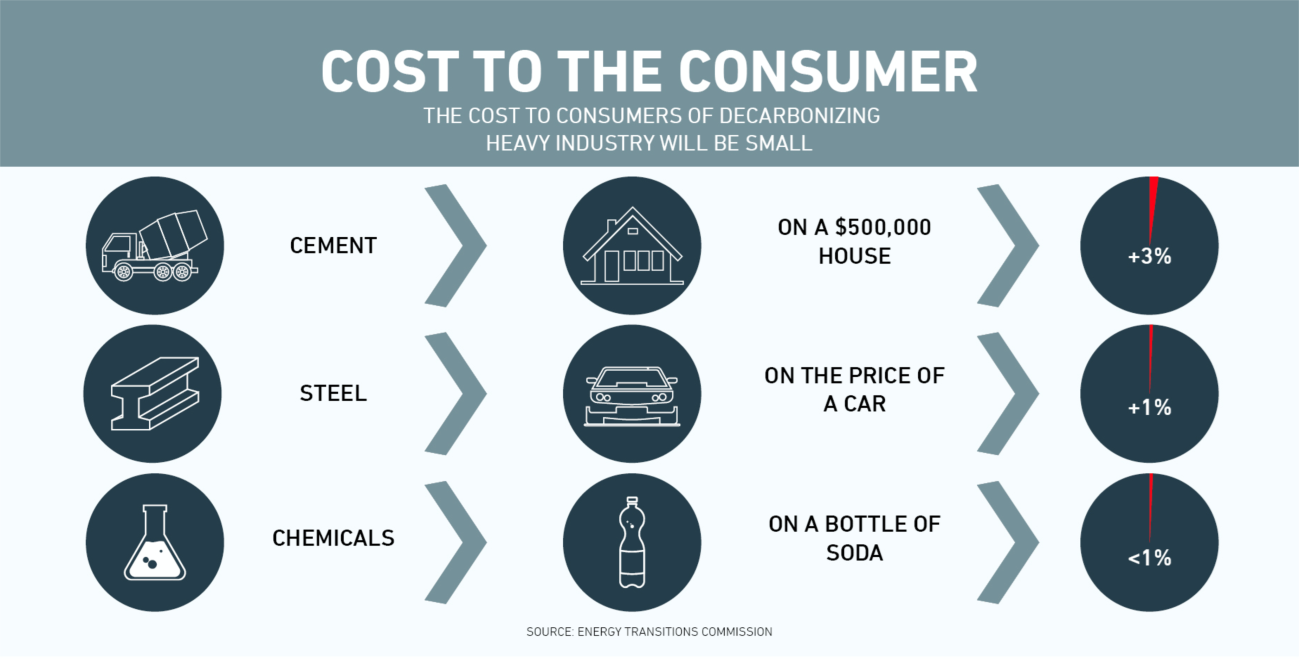 A 'low carbon' or 'carbon neutral' label for the entire production chain might entice them to trade up and drag the wider market along – in the same way that organic produce gained momentum among the 'healthy eating' community.

For businesses, labelling will help differentiate their products and simplify the sourcing process. “Procurement can use labels to identify certified low-carbon suppliers more easily. Supplier certification, if well designed, may also give buyers a solid audit trail for a product's environmental credentials. This will be increasingly important in stimulating demand from end-users,” suggests Maria João Duarte, Representative to the EU Institutions at Mitsubishi Power (formerly Mitsubishi Hitachi Power Systems or MHPS).

Alongside consumers and businesses, public procurement could significantly contribute to demand generation if it prioritizes low-carbon products in any buying decision. This could make a significant difference given that the value of public procurement accounts for an average of 13% of GDP, according to the OECD.

Energy-efficiency standards and ratings have proven to be particularly effective in stimulating the take-up of energy-efficient solutions.

Examples are the EU's energy efficiency directive, which sets out energy efficiency standards and ratings for anything from white goods to buildings, and the Corporate Average Fuel Economy (CAFE) standards in the United States, which regulate how far vehicles must travel on a gallon of fuel.

There is scope to expand the use of such standards – especially in markets where they are not yet common. However, policymakers need to enable rather than stifle innovation, which means not being specific about which technologies buyers should choose.

Boosting demand for carbon-neutral products relies on access to markets where these products can be sourced.

More open international trade has been credited with helping create global markets for clean energy technologies like solar and wind.

Measures to facilitate freer trade of low-carbon energy technologies critically need to be included in any new global and regional bilateral trade agreements.

Finance is another critical facilitator, as highlighted by schemes such as the G20's Task Force on Climate-related Financial Disclosures. The TCFD has created a framework for climate-related corporate disclosure with a view to guiding the financial community in identifying and favoring responsible corporate behavior and carbon neutrality through its investments.

In turn, this practice will build greater demand for carbon-neutral solutions.

4. The role of carbon pricing

Players as diverse as the International Energy Agency, World Economic Forum and the UN Secretary-General have advocated the use of energy taxation and carbon pricing to force major emitters to decarbonize. The inventor of the concept, William D. Nordhaus from Yale University, was honored with a Nobel Prize in Economic Sciences in 2018.

For example, following the introduction of a carbon tax, Britain's greenhouse gas emissions fell to their lowest levels since 1890, thanks to utilities switching away from coal to lower carbon generation methods.

There are at least 45 countries and regions with such measures, but there are large variations between their individual commitments. Unless some level of global alignment can be reached, there is a risk of 'carbon leakage' – where industries move production to countries with low or no price signal.