Official data from Germany’s Federal Network Agency has suggested that renewable energy provided more than 100 percent of the country's power on Monday.

Official data from Germany’s Federal Network Agency has suggested that renewable energy provided more than 100 percent of the country's power on Monday.

The symbolic step took place during May Day when renewable output, bolstered by a bright and blustery public holiday, reached 53,987 megawatt hours (MWh) of power, consumption was at 53,768 MWh.

Reports from the agency suggest that renewables maintained the high level of generation for about 2 and half hours during the middle of the day.

At their height, onshore and offshore wind farms were generating 27,246MWh, or 52 percent of all power; solar panels reached 19,668MWh, representing 37 percent. Hydropower and biomass filled in the rest.

The news is, however, not the first time Germany has been able to achieve the feat, having first exceeded 100 percent renewables on 1st January this year, another public holiday.

Renewable power also regularly provides high levels of generation to the national grid; across the whole of 2017, 36 percent of electricity came from renewable technologies. Despite the strong growth of clean power in the country, carbon emissions have not declined, instead remaining flat for the past three years. This has been caused by the continued use of coal-fired power plants, especially lignite, which is particularly carbon intensive.

Peter Altmaier, Germany’s Federal Minister for Economic Affairs and Energy, responded on Twitter that the latest milestone was “great”, but that more power lines were needed to ensure electricity reached all parts of the country.

Germany is already building the SuedOstLink, a 580 kilometre underground cable to connect the two ends of the country. The project, being co-financed by the European Union, had initially proved controversial with local communities due to initial plans to build overhead cables along the route. 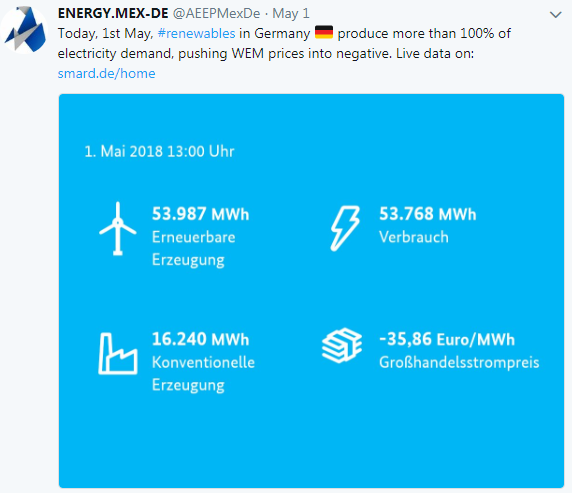