The total €337.2 million deal will take the form of both loans and contributions towards a range of projects which support sustainable development. These include €216 million towards climate smart agriculture programmes and modernising the electricity grid network. €90 million will also be spent on helping the country adapt its water supply and resources, especially in the face of increased extreme weather.

€31 million will also go towards renewable energy and energy efficiency programmes, promoting environmental standards across the country, and improved coordination of climate finance.

The signing ceremony took place on Sunday in the Bangladesh capital of Dhaka between the German ambassador Dr Thomas Prinz and Economic Secretary Kazi Shofiqul Azam.

Germany has a history of providing economic assistance to the country. Since 1972, it has supported programmes ranging from poverty alleviation and health to good governance and human rights. The latest assistance represents the evolution of this aid to confront the major challenge of adapting to climate change in the country.

As a low-lying country, Bangladesh is particularly vulnerable to the impacts of climate change, and stronger storms are becoming more commonplace. In 2017, it was damaged by severe flooding which led to the deaths of 1,200 people, and affected more than 41 million. One third of the country was under water during the worst of the floods.

Three major rivers intersect the country and it sits next to the Bay of Bengal. Scientists have linked the rise in sea surface temperatures in the Bay as the cause behind Bangladesh experiencing some of the fastest sea level rises in the world. 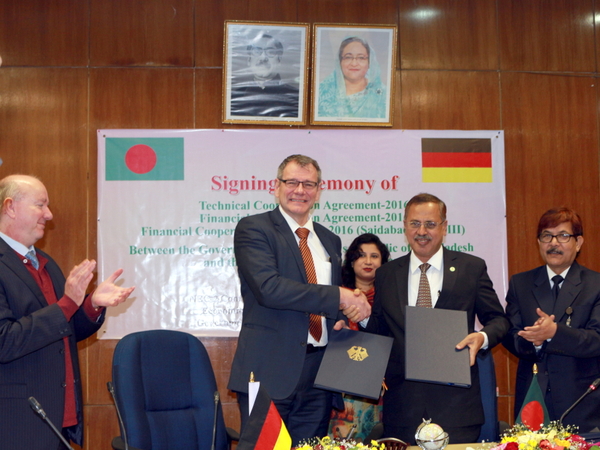 The two countries signed the agreement on Sunday.