By 2050, urban areas in sub-Saharan Africa will be home to 800 million more people than in 2014, according to New Climate Economy, and these will all live, work and study in buildings. Future growth in Africa presents a tremendous opportunity to reinvent the way we build – to benefit the economy, society and enable humanity and nature to thrive together.

In London, UK, where the World Green Building Council is now headquartered, over 80 per cent of buildings that exist today will still be there in 2050. Almost 80 per cent of the city’s greenhouse gas emissions come from these buildings, and the Greater London Authority Energy Plan has estimated that to limit global warming within 2 degrees Celsius, these emissions must be dramatically reduced.

The challenge in London, like many developed cities, is to undo the mistakes of our past, through retrofit, renovation and in some cases even demolition. Buildings designed with poor insulation, which prioritise cars over people, which use materials now understood to be harmful, and which do not factor in the health and well-being of their inhabitants, must all now be changed and fixed. In contrast, in Africa, 80 per cent of the buildings that will exist in 2050 have not yet been built. Unlike many other regions, Africa now has the chance to get building right from the start.

Sub-Saharan Africa is among the fastest-growing regions of the world, expanding at 4.5 per cent per year, with countries such as Ethiopia, Zambia and Tanzania expected to reach 7 per cent. By 2035, the number of Africans joining the working age population will exceed that of the rest of the world combined (http://www.imf.org). With this rapid economic growth comes a significant boom in construction projects across the continent – in 2014, the total estimated value of all construction projects was estimated to be US$325,828 million, an increase of 50 per cent from 2013 (Deloitte Construction Survey, 2014).

"Sub-Saharan Africa is among the fastest-growing regions of the world, expanding at 4.5 per cent per year"

Such growth presents significant opportunities, but also challenges. Over 200 million Africans live in informal settlements, often migrating from rural villages in search of better economic opportunities. In Dar es Salaam, for example, it is estimated that up to 70 per cent of the population live in informal settlements. But many of these settlements are so poorly designed that economic, social and environmental stability are at risk. Foreign investment is pouring in, not only bringing needed funds but also foreign materials and practices, some not appropriate for the country’s own unique challenges. National, regional and city governments lack the capacity to keep pace with the rapid change and establish governance and planning frameworks that could strategically guide growth to benefit Africans today and tomorrow.

The theory of change underlying the Green Building Council model is that local leaders are best placed to enable their own market transformation. While outside help is tremendously important to provide capacity, start-up capital and best practices, ultimately, leaders from the country can best shape, design and build solutions fit for local climatic needs, culture, politics and business. In line with this model, GBCs in the WorldGBC Africa Regional Network are focusing on four strategies – supporting strong regulatory and voluntary frameworks; recognising and scaling local building materials and practices; training the green building workers of today and tomorrow; and directing much-needed foreign and domestic investment to green building.

We have seen around the world that strong national and city legislative frameworks, complemented by large-scale uptake of voluntary certification, are required to provide much-needed guidance and direction to an emerging green building market. But in many African countries, minimum standards for building and construction either do not exist or are decades out of date, leading to widespread low quality, inefficient and unsafe structures.

Kenya’s current building codes were written 20 years ago, and so a number of foreign standards have been used instead, to enable international benchmarking. But now a new framework has been developed with the Kenya Green Building Society that takes into account the Kenyan environment, Kenyan materials and the Kenyan people. In Ghana, the Green Building Council has worked closely with the national government to create the Eco Communities National Framework, providing guidance on how sustainable communities should be planned, designed, constructed, operated, maintained and renewed.

In addition to developing standards, Green Building Councils in Africa also are working to recognise and scale building solutions that celebrate the rich geographic, cultural and historic traditions of Africa. Increasingly, green building practitioners recognise that sustainable practices are not always modern new technologies but, in some cases, actually ancient practices grounded in local materials and processes.

"Green Building Councils in Africa are working to scale building solutions that celebrate the rich geographic, cultural and historic traditions of Africa"

In Kenya, Green Building Society Chair Elizabeth Chege queries the value of foreign practices. “Why do Kenyans copy from environments like London or Dubai with very different climates, or look to China?” she asks, “when materials such as clay can be sourced locally – and also create better internal environments suited to the Kenyan climate.” Renowned architect Nina Moritz recently spoke to the Namibia GBC about building with locally sourced materials, such as sandbags which not only make use of the most widespread, even ubiquitous, material in the country, but also provide a cooler and more comfortable interior environment than foreign materials might provide. Local solutions can not only be more sustainable, but better for the well-being of building inhabitants.

Standards do not always have to be government-led. In South Africa, and spreading across the rest of Africa, Green Star and other certifications are recognising leadership by rating and recognising the green performance of individual buildings.

South Africa’s first 100 Green Star certified buildings (they now have 130, almost doubling in the last 12 months) on the continent are estimated to save 132 million kWh, 171 million kL of drinking water, and about US$7 million a year. South Africa has also introduced a socio-economic certification category which allows the social and economic achievements of buildings to be recognised and rewarded, and has developed an international socio-economic framework to be used by other GBCs for their ratings tools.

Green Building Councils are also proving instrumental in transforming labour markets – training a green workforce and providing them with local employment, while also giving their companies and countries a global competitive edge as markets align towards a decarbonised economy. In Kenya, they are starting young. For the past three years Web Limited (a member of Kenya GBS) has run a Green Schools Campaign to give parents, teachers, students, companies and local organisations the opportunity to transform schools into healthy, safe and productive learning environments.

To date this campaign has directly reached 10 different schools in Kenya, including in the Mathare Settlement (see photo), involving 1,412 students, teachers and local partners. The Kigamboni Housing Estate, a sustainable community supported by the Tanzania Green Building Council, will house 200 families, and has established a training centre on site so that local workers can build competitive skills that could be deployed elsewhere, beyond the life of the project.

"In Tanzania, the GBC has partnered with the Bank of Africa to provide low-interest loans to finance buildings"

In order to realise the opportunities, Africa must see a large-scale deployment of private, public and philanthropic investment. By increasing the supply of innovative financial mechanisms as well as the data and evidence required to build a strong investment case for green development, national and international funds will flow. And there are promising signs of emerging green shoots.

South Africa has been a pioneer in green or ‘climate’ bond issuance, which can direct investment into green building; the Industrial Development Corporation and Nedbank issued a green bond in 2012; and Johannesburg issued the first municipal bond in the world in 2014. In Tanzania, the GBC has partnered with the Bank of Africa to provide low-interest loans to finance buildings meeting green standards.

Furthermore, the business case for green building continues to strengthen with new data, particularly in South Africa – the 2015 Global Real Estate Benchmark (GRESB) report for investors includes data on South African real estate portfolios and their green performance; the number of building and construction firms anticipating more than a majority of their work will be green will triple between 2012 and 2015 (WorldGBC/McGraw-Hill World Green Building Trends SmartMarket Report 2013); and the payback for green building projects strengthens as energy tariffs increase.

In September 2015, 150 world leaders formally adopted the first ever Sustainable Development Goals (SDGs). Several months later, many of the same world leaders are debating in Paris whether climate targets go far enough, how they should be implemented, and who will pay. It is in 2016 that the hard work of implementation begins, and as that happens, we encourage international leaders to turn to the green building movement.

As the SDGs clearly state, peace and prosperity for all can only be achieved if we decouple economic growth from environmental degradation. And to do that, we must listen carefully to the voice of tomorrow’s African designers, architects, developers, and local craftsmen and women – including the schoolchildren of Mathare North Primary School – who encourage us, “Let’s Go Green!”.

Terri Wills is the CEO of the World Green Building Council. Previously, Terri was the Director of Global Initiatives with the C40 Cities Climate Leadership Group, the London City Director Clinton Climate Initiative, and worked for the British Broadcasting Corporation as a Head of Strategy. Terri is Canadian, based in London, UK 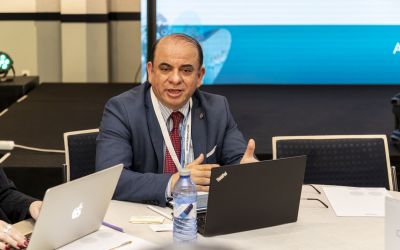