Renewables overtake coal in the EU for the first time

Renewable technologies, covering wind, solar and biomass, have beaten coal generation for the first time in the EU, according to the latest figures for 2017.

Renewable technologies, covering wind, solar and biomass, have beaten coal generation for the first time in the EU, according to the latest figures for 2017.

This is the conclusion of a new report compiled by the think tanks Sandbag and Agora Energiewende, which analysed data from the EU’s official statistics agency EUROSTAT.

The report, entitled The European Power Sector in 2017, highlights the sharp increase in renewable generation across 2017 with wind, solar and biomass leading the charge.

In 2016, these three renewable technologies, excluding large hydro, provided 18.8 percent of the EU’s electricity, while coal provided 21.5 percent. In 2017, this figure increased to 20.9 percent compared to 20.6 percent for coal.

The reasons behind the move can be attributed to the strong growth in capacity combined with the closure of coal plants in Western Europe.

Five years ago coal was providing double the amount that wind, solar and biomass was producing. However, policy decisions to close coal plants, as a leading contributor of carbon emissions, have seen coal’s share of the electricity mix plummet in certain countries.

At the same time, these renewable technologies combined grew their share of electricity generation by 12 percent. Wind power, in particular, did most of the heavy lifting with generation increasing by a massive 19 percent, the majority of which was in Germany and the UK.

By contrast, the report highlights that solar power increased its share by 8 percent, which could be higher considering how cheap the technology has become. Biomass rose by 3 percent. Despite the success in renewable generation, overall fossil fuels increased their share of the mix for a third year in a row thanks to renewed usage in Germany and Eastern Europe. The report concludes that “whilst the energy transition in the power sector is generally heading in the right direction, a lot of work remains to ensure its implementation is as effective, cheap, secure and fair as possible”.

Dave Jones, Energy Analyst at Sandbag, commented that retiring coal plants is the single biggest difference any country can make towards transitioning to a low-carbon economy: “We forecast Europe’s 258 operational coal plants last year emitted 15% of total EU greenhouse gases. In 2017, Netherlands, Italy and Portugal added their names to the list of countries to phase-out coal, which is great progress. We need a fast and complete coal phase-out in Europe”

Matthias Buck, Director of European Energy Policy, Agora Energiewende, said: “EU renewables growth has been increasingly reliant on the success story of wind in Germany, the UK and Denmark, which has been inspiring. If all countries in Europe engage in this, 35% renewable energy by 2030 is entirely possible”. 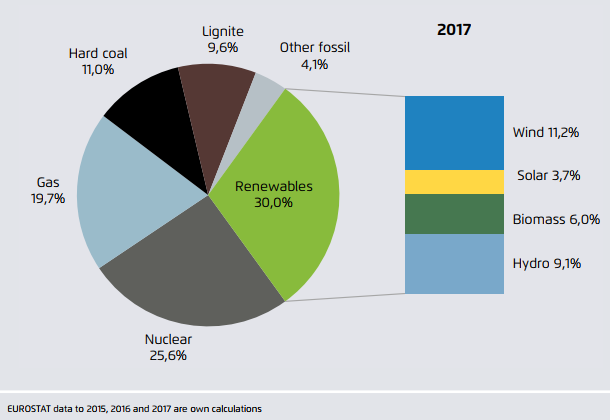